Our hopes of a good summer are dashed with the start of what was to turn out to be one of the wettest summers on record.  Just typical.  Despite this, work continued apace with the main activity being in the garden and on the roof, with the outbuildings made watertight in preparation for the installation of the boilers.

Our gardening efforts concentrated on the Rhododendron bed.  ‘Double digging’ to cull the nettles (thanks Mum!), cutting back the many overgrown plants and planting some new ones.

A head gardener hard at work

A White Rhododendrum – a rarity the head gardeners tell me. 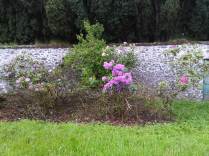 Not sure on this colour scheme… 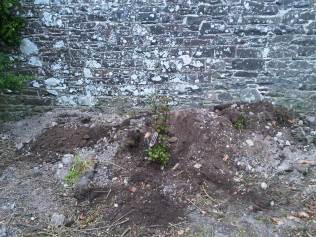 Another present from Oz

Roofing work centred on the back of the outbuildings.  This was the chosen site for the boilers and the equipment for our water supply so getting it watertight was a huge priority.  It also turned out to be a much bigger job than expected given a lot of hidden rot (of the wet variety – the other sort will feature a lot more later) and some pretty poorly designed guttering.  However, all was not bad – Dave & Tony found a new friend in the form of Huw the Shrew!

Houston, we have a problem… 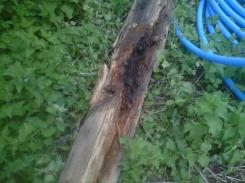 Hands up for a diagnosis of rot 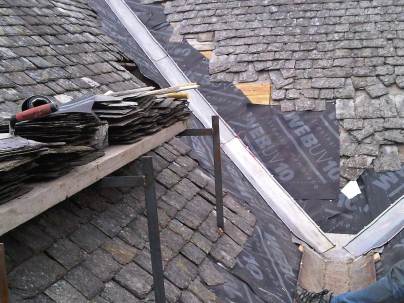 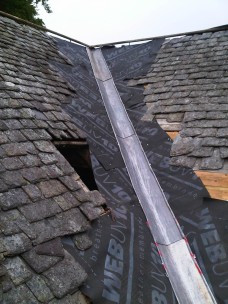 Looks so nice… pity it all gets covered up! 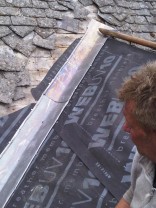 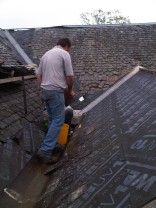 Dave: “I hate jigsaws” Tony: “start at the corner” 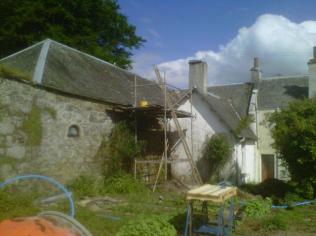 The last day of summer?

Some other photos showing the cute hot water tank in Rex room that would have been for the Groom ‘back in the day’, Tony sporting one of the waterproof onesie’s before they became fashionable and a saw horse he made to assist with the many hours of chainsawing ahead!

“Nobody told me it was this sort of camp!”

Meg to Tony: “Next time, please ask before you make me a present”

And just to prove the weather was really not very good, a photo taken in the middle of June from the bridge over the Manor Water looking upstream.

That’s a lot of water!