Embowered among old trees, with windows to the south, overlooking the little river which goes murmuringly on its way not many feet distant, Hallyards was a fitting retreat for the venerable professor, whose study (one of the apartments) is still pointed out. During his occupancy, the garden was greatly enlarged, and surrounded with its remarkably high wall ; and the professor furnished the garden with a handsome sun-dial, which stands in the centre of the radiating walks, bearing the inscription, ‘ SOLI POSUIT. A. FERGUSON, 1803.’ From A History of Peebleshire 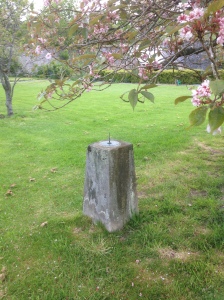 Hallyards has a rich historical background, complete with visits from Sir Walter Scott, connections to notable architect Sir Robert Lorimer and, perhaps less well known but of equal or greater importance, home to the esteemed Professor Adam Ferguson. It is the latter, and his connection to Hallyards, that has been recognised through the award of a commemorative plaque that was unveiled at a brief event on Friday 24th July 2015.

Adam Ferguson was a Scottish Philosopher and Historian. Most significantly he was a philosopher of the Scottish Enlightenment, during the 18th Century when Scotland was the world fore leader of scientific and philosophical thought. His contemporaries included such famous names as David Hume and Adam Smith and it is perhaps surprising that Ferguson is not better known as a result. Indeed, Adam Ferguson is sometimes called ‘The father of modern sociology’ in recognition of the many dimensions of his work. 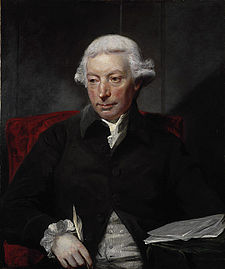 A Perthshire upbringing in Logierait, bordering the English speaking lowlands and Gaelic speaking highlands, was followed by University life first at St Andrews and later to study divinity at Edinburgh University with a view to ordination. It was here than be met some of the leading figures of the Scottish Enlightenment. When the Jacobite Rebellion broke out in 1745, despite only having completed three of the required six years of theological study, he was granted a licence to serve as minister so that his knowledge of Gaelic could be put to use as deputy chaplain of the Black Watch. He became principal Chaplain in 1746, remaining with the regiment until 1754, whereupon he left the Presbyterian ministry to pursue a career as writer and scholar.

He obtained his first academic post in January 1757 when he succeeded contemporary and friend David Hume as librarian to the Faculty of Advocates in Edinburgh. In 1759 Ferguson secured a university appointment as professor of natural philosophy in the University of Edinburgh. Five years later he was able to transfer to the Chair of Pneumatics (philosophy of mind) and Moral Philosophy, for which Hume had unsuccessfully applied in 1745. In 1767 he published his most famous and important work, the Essay on the History of Civil Society. It has been described as a natural history of the progress of humankind, very much part of the trend of philosophers of the Scottish enlightenment. It was well received very widely and translated into several European languages. Many other notable publications followed although possible most popular was his History of the Progress and Termination of the Roman Republic published in 1783 (the same year that he was a founding member of the Royal Society of Edinburgh). After his resignation of the Edinburgh Chair in 1785, he revised his lectures, and published them in 1792 under the title of Principles of Moral and Political Science.

After such a spectacular career it is perhaps only fitting that Ferguson should ‘retire’ to such a setting as the Manor Valley, where he intended to hone his philosophical thoughts whilst tending his highland cattle as ‘Grazier at Hallyards’. Finding Neidpath Castle a little too testing during the winter months, Ferguson was resident at Hallyards between 1796 and 1809 during which he wrote many works, including a new edition of his opus magnum, The History of the progress an Termination of the Roman Republic, and numerous distinguished essays, particularly those considering new ways of taking about God and the possibility of an afterlife. Not only did he complete notable works during his time here, but he also was host to a visit from a young Walter Scott (where he met the inspiration for his novel ‘The Black Dwarf) and invested significant sums in expanding the gardens. To this day the high walled garden still exists, as does the central sundial bearing the words: SOLI POSUIT. A. FERGUSON, 1803. Walter Scott would later go on to write Ferguson’s epitaph, pointing towards the lasting friendship between philosopher and author.

Adam Ferguson is a rich part of the history of Hallyards and Manor Valley and we feel it only fitting that he is being recognised with the award of a commemorative plaque. 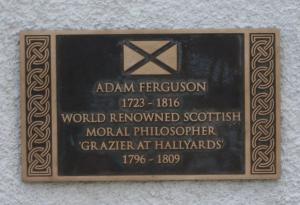